I have a special affection for this young boy.   When we first visited the salt pans in India two years ago, the families had been grappling with a very poor monsoon  season earlier that year; as a consequence, there was much less salt harvested and much less money available.

We were appalled by the general living, working and health conditions in which these families lived.  Some of the children who came to our classes  seemed to be suffering from malnutrition and other disease; no-one looked robust.   I have a photo of this young boy sitting on the earth, grey from being covered in the sandy dust, and grey from ill-health.   Throughout the year I  looked at our photos and video and often wondered what became of this small forlorn boy.   I expected that he wouldn’t survive – which would not unusual in this harsh environment and in this community where child mortality is high.

I was incredulous to see him alive and well the following year – his hair was cropped short, he had filled out and no matter how many times I looked at him, I couldn’t reconcile this child with the miserable boy I had seen only 13 months earlier.  But this year, there he was again… but now his hair had grown and the child from two years ago was visible.   I have written earlier (artistsincommunity.me) about the small but important improvements that have lifted the daily circumstances of these people, these are evident in this child’s face.

These improvements have been a combination of changes to work practices as well as better monsoons – nonetheless these lives are lived on the edge of poverty where there is nothing spare, nothing new, nothing luxurious and nothing wasted.

One of Artists in Community International’s supporters, Susie White, gave us a box of butterfly pins which she thought might be enjoyed by some of the people with whom we work. Butterflies are a much-loved symbol of change, of emergence from one state into another, of renewal, as well as of beauty and lightness.  Earlier in the year we covered Susie’s sister, Felicity Fraser’s coffin with hand-painted butterflies, symbolising all these things.  At the end of our project with the salt pan communities we gave out the pins – to the delight of everyone.   These small colourful objects  immediately pinned to tattered, dust-covered and ancient clothes, brought sparkle to the clothes as well as to the faces of child and adult alike. 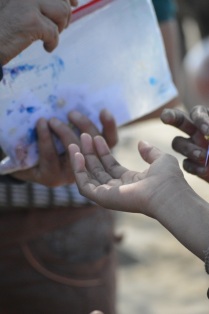 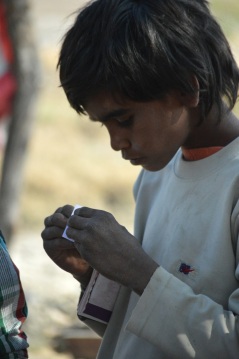 2 thoughts on “Change and emergence”