Vasily Kandinsky was born in 1866, in Moscow. He is one of the founding artists of  abstract painting and his lyrical paintings are considered groundbreaking.  He believed that a painting need not be of a particular subject, but that shapes and colors alone could be art.

He moved to Germany and became a colleague with many of German artists of the time, including Paul Klee with whom he taught art at the Bauhaus Art School. Kandinsky is the inspiration behind the series of  drawings/paintings done by the Unatti Girls (below).

Over the years that we have been coming to Nepal and teaching we have noticed a range of themes that participants love to paint or draw : mountains, temples, houses, trees, the Nepali flag, flowers and doe-eyed girls.  Regardless of the place or circumstances in which we are teaching, the pictures more or less look the same, no matter who does them.  It seems part of both the education and the culture to reproduce the same images without a desire for individuality or creativity to become part of the image.

Bhaktapur, where we stay,  has a very rich artisan culture for making beautiful handmade paper, woodcarving, metalwork and pottery.   Although these traditions and objects are wonderful to see, the same designs are made by many artisans and they have remained unchanged over many years.  In artisan work there is little individuality or creativity either.

Part of the motivation behind our arts and education program is to introduce participants to new ways of thinking, creating and being.  We encourage the imagination and aim to inspire participants to take creative risks which we hope will, in turn, give them  confidence to take on other risks and challenges in their lives.

Nepal is an extremely poor country that is not well served by its shambolic government nor by its education system with teaching methods and schools that are under-resourced as well as largely outmoded for the 21st Century.   It is hampered by an erratic electricity supply which further impedes the possibility to implement contemporary teaching techniques.  One teacher told us that due to load shedding (the lack of power for up to 15 hours per day) it was impossible to use any video, YouTube, Powerpoint or other electronic means to enliven her teaching  and enhance the learning experience of her students.

When we were in Nepal its parliament was was lurching towards agreeing on a draft constitution – a process that has been in train since 2008 and stalled, yet again.  Six hundred and one members of Parliament but there is no evidence of any real leadership emerging to guide Nepal out of its poverty or to care for its citizens.  It is heartbreaking to see the unnecessary hardships caused by this lack of leadership and co-operation.  I recall one woman about to embark on an arts program of mine telling me “that if you continue to do things the same way, you will continue to get the same results”.   It stayed with me as a very good reason to encourage people in these difficult circumstances to take creative risks and try something different.   Nepal needs leaders and visionary leaders cannot emerge for this arcane education system.

I show participants a range of artists and artworks to open their eyes to other ways of seeing and doing.   Amongst my favourites to show is the x-ray style paintings of Australian Indigenous artists.  These artists  reveal both outside and inside of an animal, as well as use a very limited palette and complex pattern. The paintings are an excellent place to start a conversation about art being not being constrained by what we see with our eyes only. 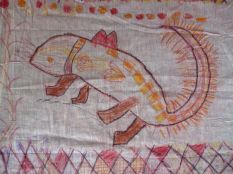 Paul Klee is another favourite artist – in his seemingly simple paintings, colour and shape work together to create harmony and delight; many have an architectural flavour although he rarely painted buildings, as such.  We use his art extensively in our program as a starting point, particularly to teach illiterate children about geometric shapes and colours, to help them observe their own city and put these things together in their art.

Their interpretations were beautiful.  The Unatti Girls, who are receiving a quality Nepali education, last year took these ideas into a series of very impressive and accomplished paintings, one of which we used as a centrepiece of our Make Do Tell fundraising campaign.  I imagine some participants and teachers find some of these ‘new’ art forms jarring to their own sensibilities, but for most, it seems like the lights have been turned on.

Unatti Interpretation before paint is added 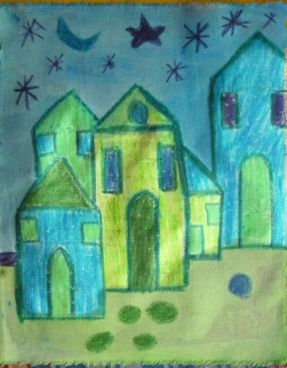 Nonetheless, each time we return, we see how education system limits students capacity to speak up, to lead, to show initiative, to be creative or expressive.  Which is where Kandinksy came in.  Although his paintings were often highly planned,  they also have a looseness, lyricism and freedom that I thought the girls would enjoy exploring.  They did, and they especially loved painting over the drawings they did the day before using water colour washes. 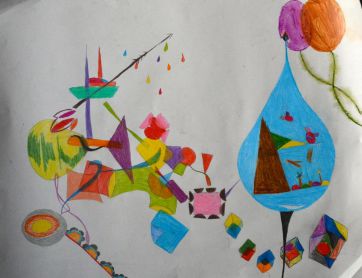 Although I was probably hoping for a more considered approach to the painting, I could see  that it was pushing the paint around that was most enjoyable to them; the paint, the brush and the paper.  We had a chat about colours and experimentation then I left them to the paints, all the time encouraging them to try something new.   Hours went by as the entire household was mesmerised by the freedom, by the paint, by their developing knowledge, by their discoveries, and the luxury of being able to make one painting after another.

The aspiration of all those who invite us to teach art and drama in their community is to effect change.   The Unatti Girls are encouraged to think of themselves as having the potential to be future leaders in some aspect of civic, community or business life.  We intend projects such as this to nurture that potential – to help them see the world through different eyes, to try something new, and to experiment and take risks.

Artists in Community International received the financial support of many individuals and the Children’s Art Village to meet most of the costs of this project.