On 25 April, 2015 a 7.8 magnitude earthquake struck Nepal.  It was felt across the entire country.  More than eight thousand people were killed and many many thousands of people are now homeless or living in temporary housing as a result.   Whole towns have disappeared, whilst others have been further isolated by damaged roads.   The earthquake devastated this already poor and struggling country.

Nine months after the earthquake Artists in Community International  (Alex Pinder and I ) was invited to run a training program with students at the Nepal School of Social Work on Trauma and Community Engagement.    We chose to use the earthquake and its effects to help students understand some of the theories that inform trauma-recovery and  to make concertina books to help them understand and express their own responses and feelings to that disaster.

Students working on their books 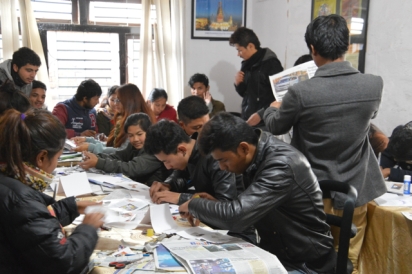 Students working on their books

Students looking at the work of others

This was the first time most of the students had been invited to reflect and express their feelings of what happened to them on that day – and ordinary Saturday when most people were relaxing or studying.  Ever since  25th April, many of the students, along with their families and communities had simply been trying to survive and manage in a very changed situation.   These are some of the pages from their books which describe people running, dogs barking, houses shaking and falling, people helping each other and living in temporary housing.

Although we were training the students  for working with community, we were also introducing them to the concept that creativity and visual language  – and making books – are potent ways to express their own stories.  What emerged from those workshops was the discovery for them, and us, that the magnitude of the disaster and the need to respond to it, had left most of them silenced by it.    They needed to explore and explain, to tell their own story, to understand that how they responded on the day was normal for people confronting a life-threatening situation.  It revealed a need … that the individual story must be told.

the books were a meaningful exercise for students 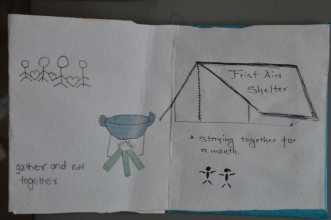 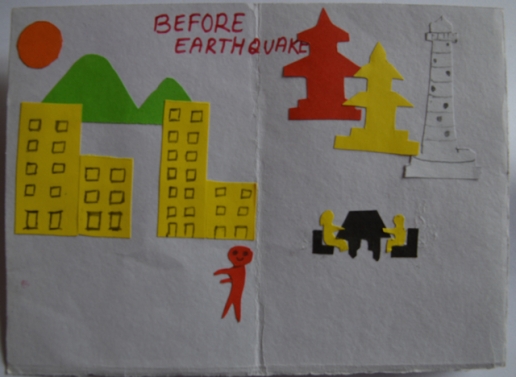 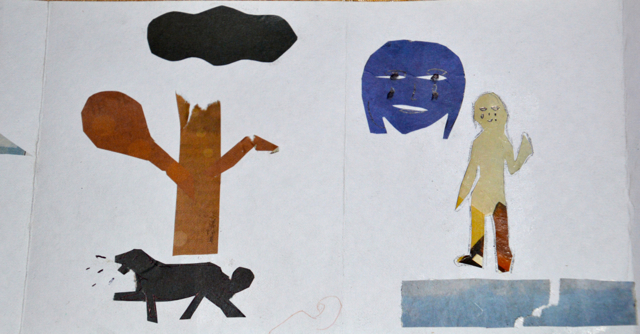